Modern Orthodox Christians will recognize this icon as an icon of the Trinity: 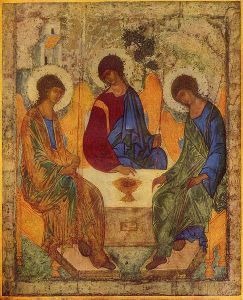 More properly called The Hospitality of Abraham, it depicts the three angels sent to Abraham to inform him and his wife Sarah that they were to have a son. Abraham, personifying hospitality, provides the best meal he is able to offer.

Ancient witness usually only sees Christ in these three angels, as represented by this witness of Eusebios of Caesaria (Evangelic proof 5,19 LGF 27, 208):

The visitors who were hosted by Abraham are leaning on a table; the two of them are on each side of it, while the one seated in the middle surpasses them in authority; may he be the Lord that was foretold us; our Saviour, to whom even the ignorant show respect, by hearkening to the divine words

A more proper (and a New Testament) icon of the Trinity is this one: 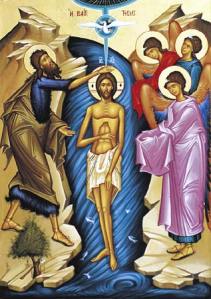 More readily known as the icon of Epiphany, the feast is also called by Orthodox Christians Theophany — which means the appearance of God. It is the first time in Scripture where God explicitly reveals Himself as Father, Son and Holy Spirit. Note the first verse of the apolytikion of Theophany:

Lord, when You were baptized in the Jordan, the worship of the Trinity was made manifest.

Intriguingly, however, St. Ambrose makes this observation in the Introduction to the second book of his treatise On the Holy Spirit:

Thus, St. Ambrose gives witness to a similar Trinitarian interpretation of the Hospitality of Abraham that modern Orthodox Christians do. I would have to do more research, but this is the oldest such witness that I am aware of.

1 thought on “Hospitality of Abraham”