Apologies for not posting anything last week. Medical emergencies on top of preparation for the Feast Day of our parish prevented us from having Bible Study and me from having any time to post my own thoughts.

The fourth Sunday of Lent is dedicated to St. John Climacus, author of the Divine Ladder of Ascent, an ascetical treatise that uses the image of a ladder to describe ways of avoiding vice and embracing virtue in order to obtain salvation. The icon of the Ladder of Divine Ascent depicts Christians climbing a ladder towards Christ while demons use various tools to try to pull them off. 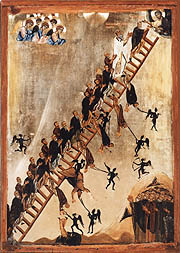 It is in this context that we examined both the Epistle Reading (Hebrews 6:13-20) and Gospel Reading (Mark 9:17-31) for this coming Sunday. We began by struggling through the Hebrews pericope, trying to understand how it was related to St. John Climacus. The image around which we were able to do this was Christ as “a sure and steadfast anchor” (Hebrews 6:19):

Our discussion of the Gospel was a little less focused: